On Interfaces, Plugins and the finer points of Application Design

I’ve been thinking a lot about interface design recently. Around client projects, I’ve been working on a premium WordPress theme called Bauhaus, which I’ll shortly be releasing on ThemeForest. I’ve spent a lot of time wrangling options in the WordPress admin interface, done a lot of research across the web and I’ve come to a startling conclusion: a lot of people are doing interface design wrong.

END_OF_DOCUMENT_TOKEN_TO_BE_REPLACED 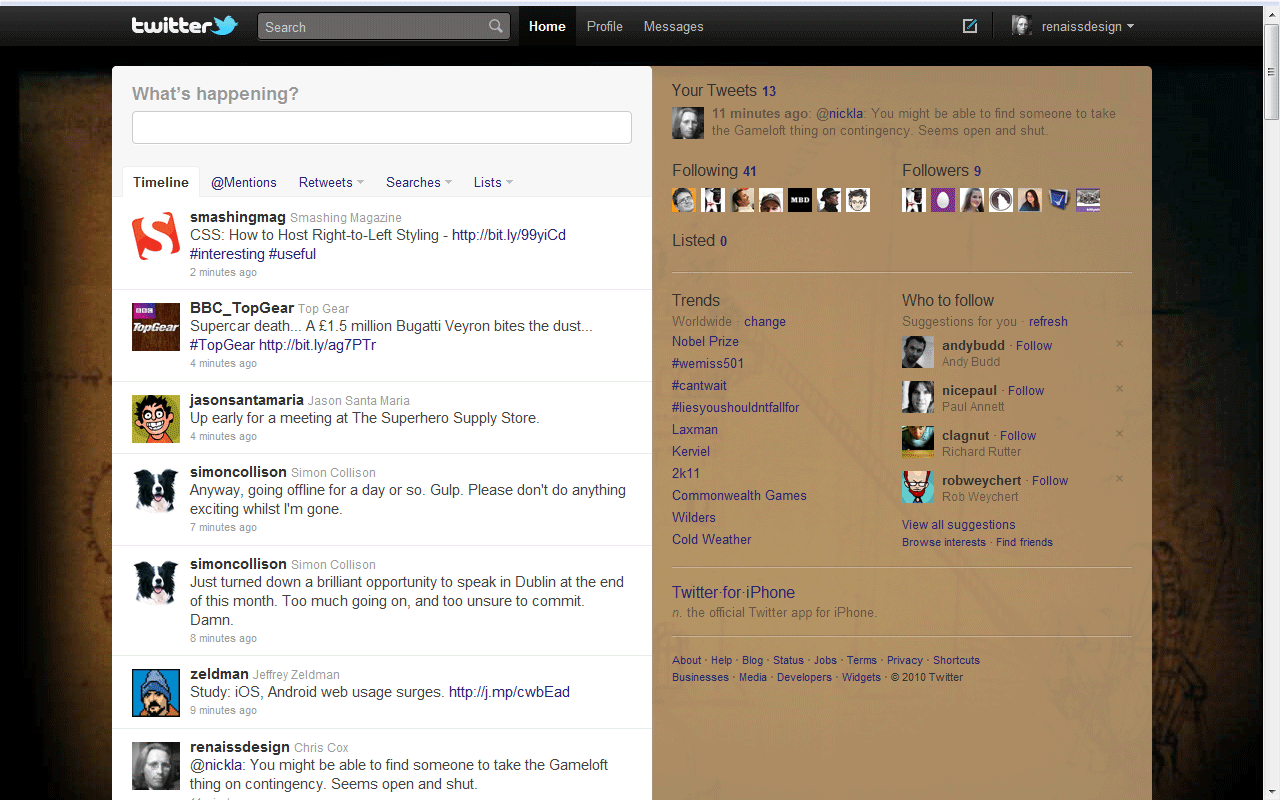 Twitter is rolling out a new UI for its web client, and I think they’ve got it right. 78% of users are using the website to post and read tweets, and the updated interface incorporates a lot of features previously only available in third-party clients.

END_OF_DOCUMENT_TOKEN_TO_BE_REPLACED

Installing and Configuring SVNServe and TortoiseSVN on Windows

After you’ve been working with code for a while, source control is a godsend. It provides a way of tracking changes, prevents conflicts and generally saves your bacon. Here’s how to set it up on Windows 7.

END_OF_DOCUMENT_TOKEN_TO_BE_REPLACED

I’ve noticed a disturbing trend recently in small business startups, especially those started by young people. A lot of these entrepreneurs, when launching their businesses, are jumping on the social networking bandwagon and using a Facebook or MySpace page instead of a traditional website. It could be because it’s a natural extension from the tools they’re used to in their personal lives or because it’s self-service and can be live in minutes, but I’m here to say they’re doing it wrong. Here’s why.

END_OF_DOCUMENT_TOKEN_TO_BE_REPLACED

Improving the User Experience with Browser Sniffing: UX Tips for a Better Website

We’re used to using browser sniffing to work around incompatibilities, to serve different stylesheets or scripts to different User-Agents with different capabilities. Of course, that approach has fallen by the wayside in recent times, with best practice now dictating that we test for capabilities rather than browser/OS combinations in our rich UIs.

END_OF_DOCUMENT_TOKEN_TO_BE_REPLACED

A designer by the name of Matt Earnshaw thought he could get away with ripping off the work of David Airey. Here’s what happened…
END_OF_DOCUMENT_TOKEN_TO_BE_REPLACED

Mistyped URL? Duplicate content? .htaccess and mod_rewrite to the rescue

It’s been a while since I’ve posted, so I thought I’d jot down a couple of ways Apache and mod_rewrite can save your life. Not literally of course, unless your website’s been linked to your life-support system by a crazed psychopath – but it should make your readers’ lives easier. Isn’t that what we’re supposed to be doing here?

END_OF_DOCUMENT_TOKEN_TO_BE_REPLACED

Does that title confuse you? You’re not alone.

Acronyms are everywhere, especially on the Web where technical terms ((X)HTML, CSS, PHP) rub shoulders with shorthand figures of speech (IMHO). In fact, the profusion of acronyms has given rise to a self-referencing acronym of its own – TLA.

END_OF_DOCUMENT_TOKEN_TO_BE_REPLACED

On the Importance of a Coding Standard

I was recently called upon to troubleshoot the mail script powering a website’s contact form, which for some reason unbeknownst to anyone was failing silently. It should’ve been an easy fix, but the more I dug into it, the more confused I became, and resorted to dumping variables to see if I could figure out what exactly was going wrong. The server was setup properly – I whipped up a quick test script, and it had no problems sending. Nothing was obviously wrong with the script itself… or so I thought.